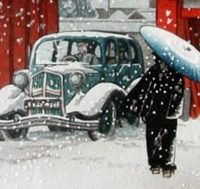 The one that started it all.

Welcome to our art store, Art-Eclectic.  We have an affinity for 20th century Japanese woodblock prints, but will also be offering Western art that we have collected over the years as well as some woodblocks from the 19th century. 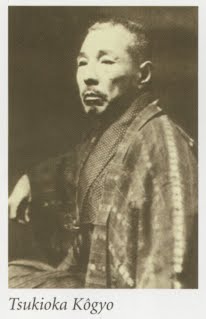 Noh is a major form of classical Japanese dance-drama that has been performed since the 14th century. Like Kabuki, it is highly stylized. Noh is often based on tales from traditional literature with a supernatural being transformed into human form as a hero narrating a story. Noh integrates masks, costumes and various props in a dance-based performance, requiring highly trained actors and musicians. Emotions are primarily conveyed by stylized conventional gestures while the iconic masks represent the roles such as ghosts, women, deities, and demons.

Kogyo’s work vividly portrays the traditional theater of Noh. He created over 550 prints, in three major print series, documenting Noh performances, with focus on the costumes and poses of the actors. These prints appeared in magazines, books and posters. At the age of fifteen he apprenticed with the great woodblock artist Tsukioka Yoshitoshi, who had married his mother. Yoshitoshi and Chikanobu are probably the most popular artists of the Meiji era. Kogyo’s interest in Noh was likely sparked by Yoshitoshi, who also had a lifelong fascination with Noh. He went on to study with the woodblock artist Ogata Gekko and developed a style that synthesized Western and traditional Japanese artistic styles. The Noh prints created by Kogyo serve as an artistically elegant and beautiful record of this theatrical genre’s customs and performances. 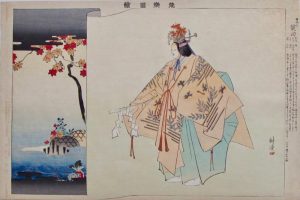 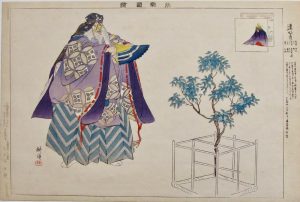 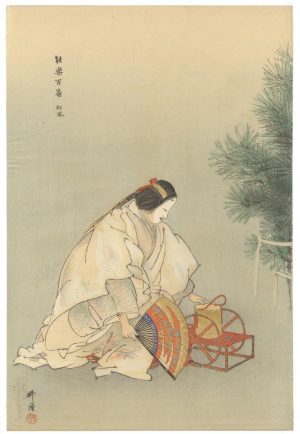 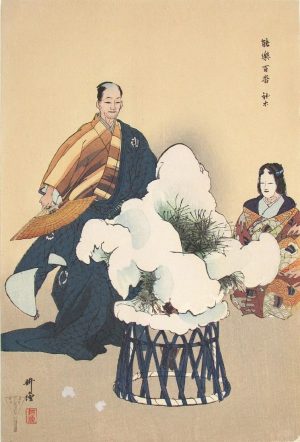 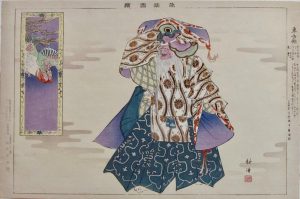 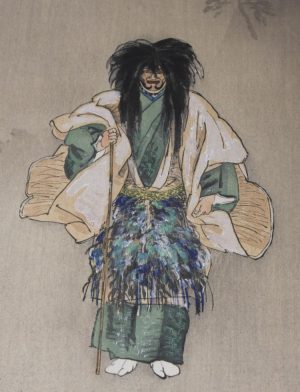 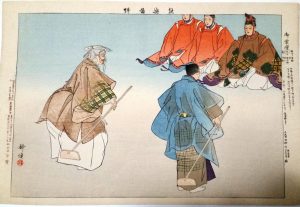 (Previous Theme) This month our theme is not an artist or era, but the many bridges seen in Japanese prints.

Woodblock print artists have a love affair with bridges, known as bashi in 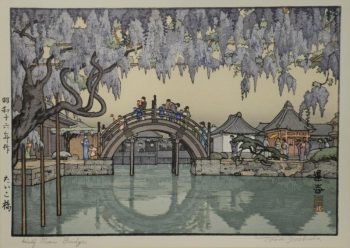 Japanese. Sometimes the bridge is the focus of the print, such as the famous Half Moon Bridge depicted by several prominent artists, such as Toshi Yoshida. It is a complex bridge which uses the structural engineering of the arch. Although arches have were used in the West since Roman times to build bridges and other structures, the arch was not a feature of Japanese architecture. Unfortunately, arched construction has limitations on size. In order to span larger bodies of water, the builders have to resort to a series of arches such as the Kintai bridge which was depicted by Tokuriki and others. Often the bridge is seen as a backdrop to the real action such as Tokuriki’s delightful play of fireflies at night next to the Uji river bridge, or Hiroshige’s iconic print of drenched pedestrians (Shower Over Shin-Ohashi Bridge).

You can see all the bridges in our web store by clicking on the magnifying glass in the upper right hand corner and then typing “bridge” into the search box and hitting enter. By the way, using the search feature is a great way to look for artists, locations, or even themes such as birds, snow, children, cherry blossoms, etc. Stay safe and keep looking at art! 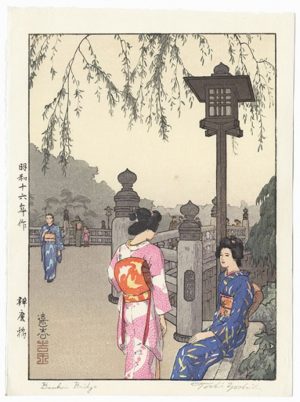 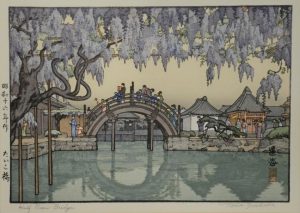 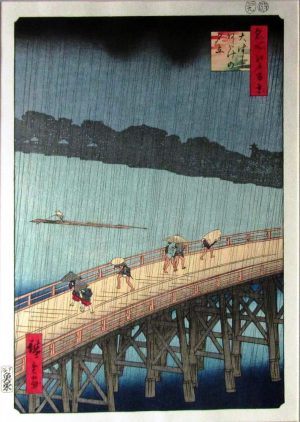 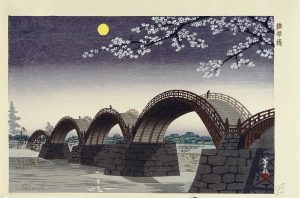 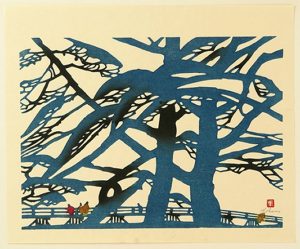 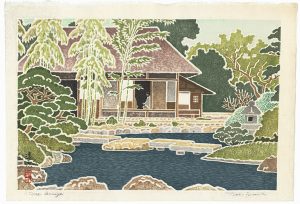 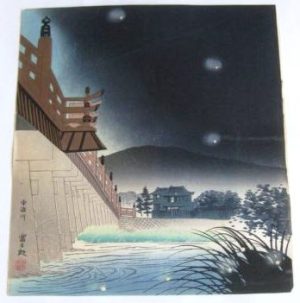 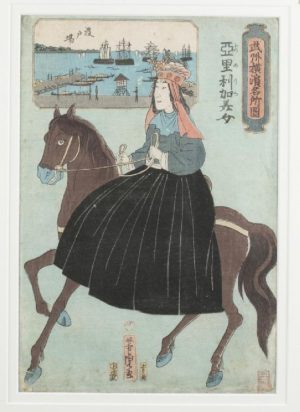 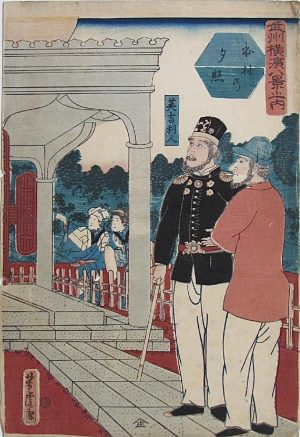 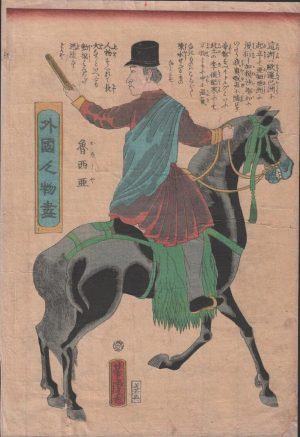 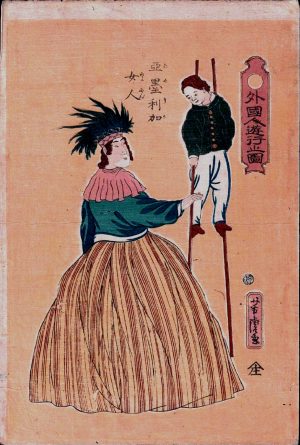 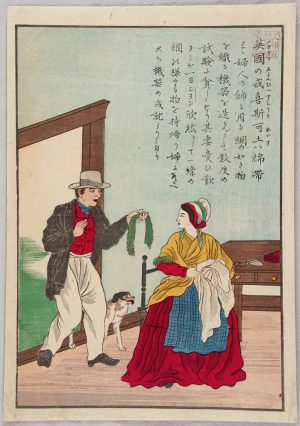 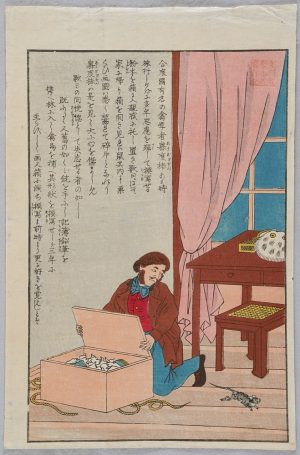 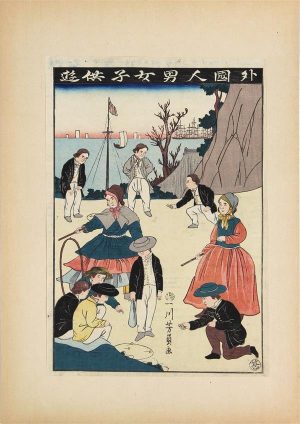 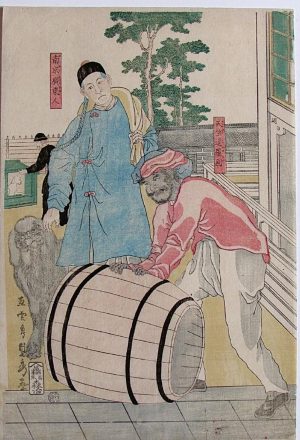 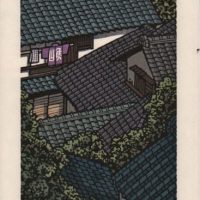 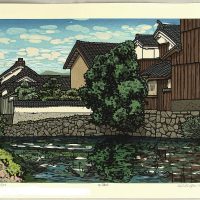 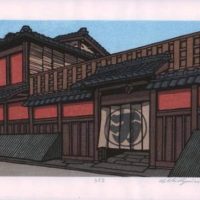 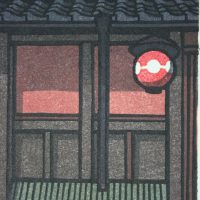